Walter Gropius founded the famous German art movement known as Bauhaus not in Berlin, as many people think, but in Weimer, a city some three hours drive to the south west.

The original Bauhaus school in Weimar closed in 1925 and a second school opened in Dessau which also closed after a few years. The third and last school, in Berlin, lasted just four years from 1931 to 1933 under the directorship of Mies van der Rohe. It was closed down by Rohe under pressure from the National Socialists, with Nazi writers condemning it as un-German. Among the criticisms they levelled against its design ethics were condemnation of the flat roofs so uncharacteristic of all ‘good’ German architecture. Generally there was suspicion that the school was a breeding ground for liberals, communists and dissenters. A large number of artists associated with the Bauhaus emigrated in the 1930s, leading to led to the spread of the movement internationally.

This year, 2019, Weimar is preparing to celebrate the centenary of a movement that became an international phenomenon and has left its stamp in all areas of design. Surprisingly, given that this centenary has been so much anticipated, Weimar was far from ready for the event by as late as March.

The largest project – the new Bauhaus Museum Weimar – will open in just under four weeks on April 7th and it is clear that a massive effort is being made to meet this date although one suspects that there will be a strong smell of concrete and paint in the air. Pictured here is how the museum looked in March. 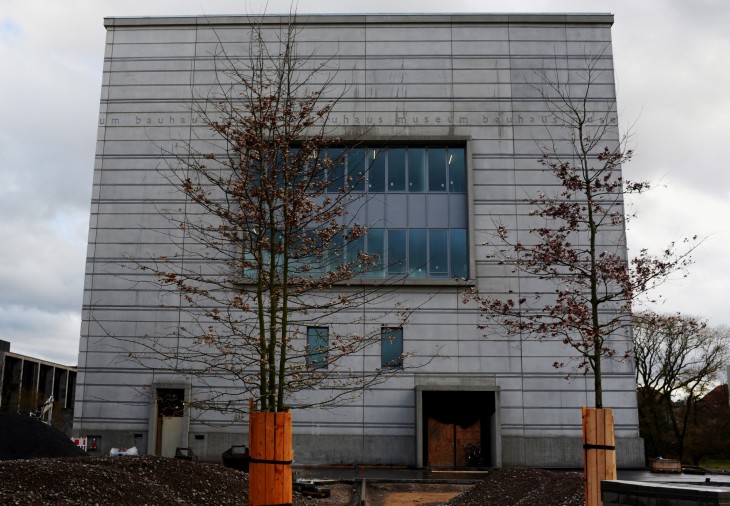 Despite its name, Bauhaus (literally meaning ‘building house’) and the fact that Gropius was an architect by training, the first school in Weimar had no department of architecture in its early years. Nevertheless, it is certain that most people today associate the term with buildings and early iterations of modernism.

Weimar today is the centre for a new Bauhaus School with several buildings spread across the city which include original Bauhaus buildings and new build elements that carefully contrast with them. Behind the imposing old concrete library can be seen some of these. 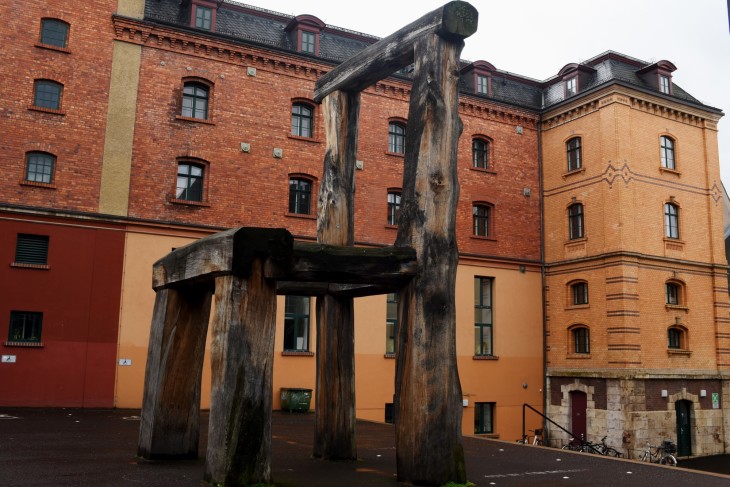 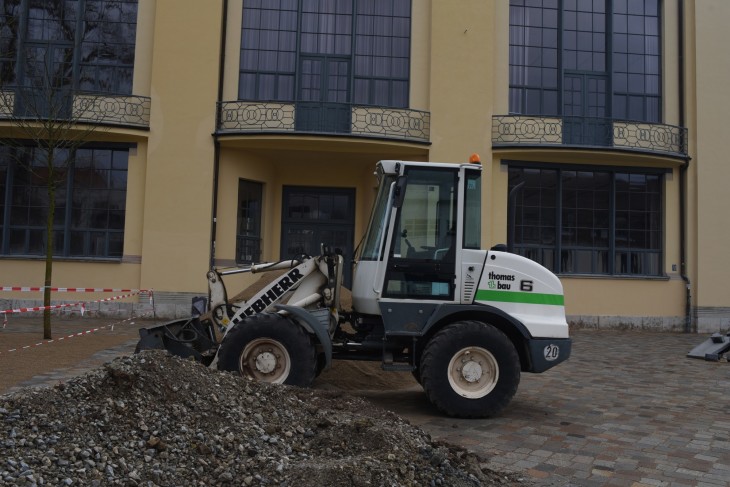 Next to the school are further modern extensions which blend harmoniously with their 1920s neighbours. 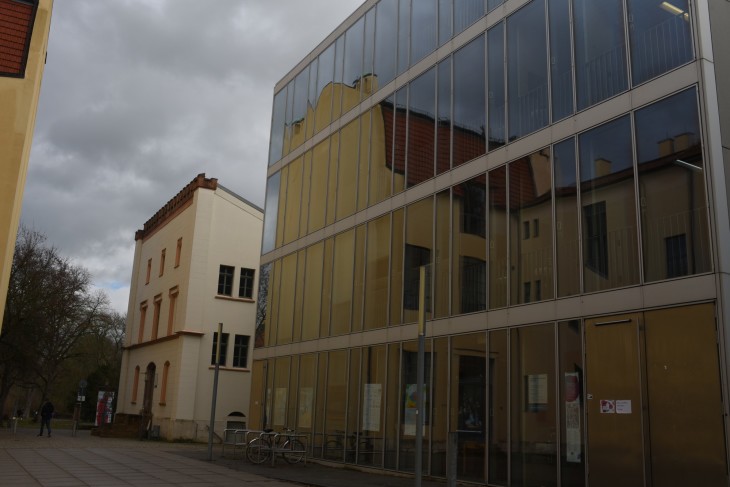 Elsewhere hasty arrangements are being made to finish work on the first residential home based on Bauhaus principles (and with apologies for the picture quality which was the result of the fencing) called the Haus am Horn. 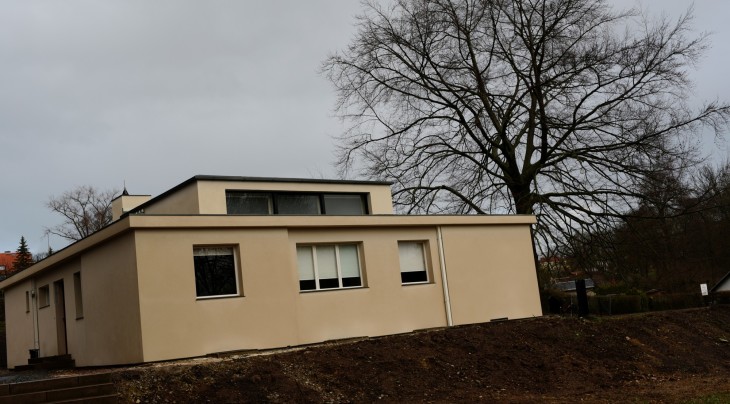 This modest building was officially due to open in January but now this has been pushed back to May. The landscaping – which is being ‘upgraded’ – remains far from convincing. Extensive work to restore what was left of the original building has taken place. Completed in 1923, the house was designed by Georg Muche and his students and it aroused great interest, immediately acquiring the nickname The Coffee Grinder. Today it is designated as one of the Bauhaus UNESCO World Heritage Sites. The Haus am Horn is lucky to have survived considering the period, including the hyperinflation of the 1920s, its use by the German war office, plans to demolish it and later tenancies under the German Democratic Republic. Almost all of the original furniture has disappeared but restoration work has reinstated the internal colour scheme of reds, yellows and blues according to Kirsten Nietzsche, a local restorer.

The street where the house is located overlooks Weimar’s Park Am der Ilm, an 18th century park on the banks of the River Ilm where Goethe had a summerhouse, now a small museum. 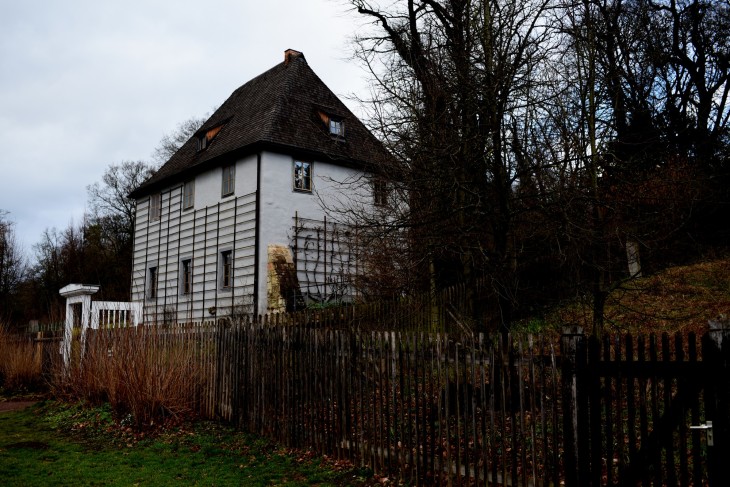 Walking back from the summerhouse through the park you can visit the Russian cemetery with its ranks of plain graves to the Red Army soldiers who died in the conflict; all young men who died in 1945 or 1946, a place of bleak sorrow and remembrance behind a wall punctuated by the dark gate bearing the Soviet’s Red Star.

Most tourist guides however will point visitors to none of the above.