IT will come as no surprise to parents jostling for space outside London’s Science Museum at half-term that the area now claims to have almost as many visitors as Venice. This year saw a record 17 million tourists visiting South Kensington’s cultural hub and the figure is rising. 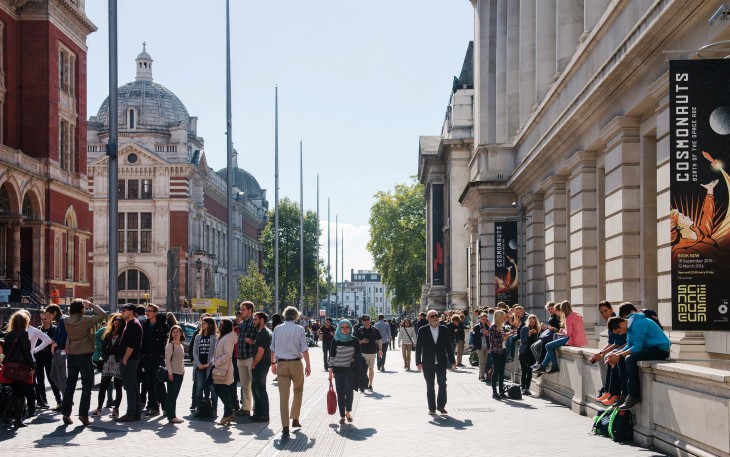 More than 12 million people year visit the Victoria & Albert, Science and Natural History museums alone and a series of projects designed to transform the “visitor experience” are underway. The Underground station is one target of campaigners, with TfL in the firing line. Anyone with a buggaloo or wheelchair will know that Venice is no less inaccessible than the gateway to ‘the museums” .

The catalyst for TfL to make good this deficiency has been the transformation of Exhibition Road itself, calmed by reducing it from a dual carriageway to single lanes where the lack of road markings forces drivers and pedestrians to take exceptional care of each other.

“In a particularly touristy area like Exhibition Road, pedestrianisation is incredibly important. The absence of a busy road gives the place an almost continental feel, and there’s a certain serenity that comes with not being limited to an overcrowded pavement,” says George Franks of agent Douglas & Gordon. “People tend to amble through, and the architecture is so wonderful that it’s a great advantage to be able to take the time to admire it. You do get the occasional car, but the driver always looks as though he’s taken a wrong turn.”

To cope with the pressure of mass tourism on this scale, both the V&A and Science Museum have embarked on new entrance schemes that will further transform the area which is once again calling itself Albertopolis. It’s a good name.

Prince Albert, his statue ablaze with gold leaf after the multi-million pound restoration of his monument, cannily advised that the £186,000 profits from the Great Exhibition be invested in land around the Hyde Park site where it was held. The Royal Commission for the Exhibition of 1851 (which to this day spends those profits and acts as landlord) followed his advice and purchased 96 acres where now we enjoy the cultural and scientific riches of the three great museums as well as the Royal Colleges of Art and Music, Imperial College and Royal Albert Hall. This was the world’s first purpose built cultural quarter – a truly Victorian or perhaps Albertian vision which has been an outstanding success story.

Change has been inevitable. A couple of years before Exhibition Road was calmed, Foster + Partners had created a new ‘shop window’ for Imperial College’s Business School at the Exhibition Road entrance, cloaked entirely by a glass and steel envelope that serves as an atrium to the drum shaped faculty within.

The new front door hides the remains of the controversial 1960s building, the result of the decision to demolish one of the most extraordinary of the new buildings in Albertopolis: the Imperial Institute.

This was the engine room of the British Empire, built to promote scientific research which would benefit its industrial and commercial development. The architect T.E. Collcutt came up with a slightly Eastern looking design crossed with magnificent Renaissance-style towers and not omitting a touch of the Gothic. Queen Victoria laid the foundation stone for this splendid mongrel in 1887 to the strains of an Imperial Ode composed by Arthur Sullivan.

“Within and without was exquisite craftsmanship in rare and beautiful materials,” a contemporary description runs. The decision to tear it down just 65 years after it was built was met with outrage. The Times letters pages overflowed protests led by John Betjeman, an early campaigner for heritage architecture, to no avail. Demolition began in 1957 with only the massive Queen’s Tower saved – it may still be glimpsed from the road. It took 8 years to finish the job, and bonfires burned for weeks as the collected ethnographic art and trophies that had poured in from the Colonies were consigned to the flames. A brigadier of the Coldstream Guards appalled at the vandalism was reported to have dashed in and out rescuing bits of decorative stonework.

The Imperial Institute, renamed the Commonwealth Institute, was moved to Kensington High Street under the parabolic copper roof of the now Grade II* building. Closed by trustees in 2002 and sold to developer Chelsfield, it was also dogged by controversy when it was alleged that some of the exhibits had been secretly sold off. Chelsfield gave the Commonwealth Institute to the Design Museum and in return pushed through a dense, high-end residential scheme by Dutch practice OMA . All but a handful of apartments in the three cube shaped blocks have sold out.

Next year will see the completion of the V&A’s new galleries and courtyard with a new entrance on Exhibition Road, the largest project the museum has undertaken for 100 years. 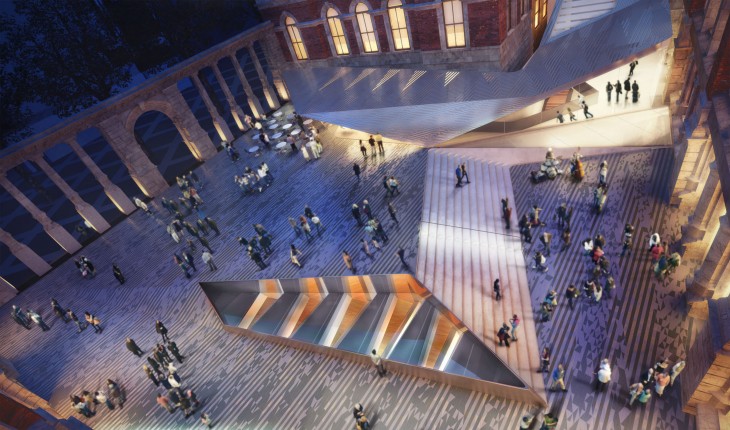 It’s a very much more discrete design than The Spiral, Daniel Libeskind’s £100 million design, likened by one critic to “the Guggenheim in Bilbao turned on its side and then beaten senseless with a hammer”.

The Science Museum also wants to “breathe new life” into its decidedly non-statement entrance through which 3.3million people pour annually. It is looking for an architect to create a “generous and contemporary space for visitors.”

Karen Livingston, director of design said they wanted “a contemporary approach that sits comfortably with the heritage architecture of our buildings.” Not to be left out, the neighbouring Natural History Museum has begun to consult on how it might transform its outdoor space. Royal Mail, recently privatised, has dug in for the gold and sold the old Post Office building in Exhibition Road. It will become the new Dyson School of Design Engineering in 2017.

“London’s original cultural quarter is not resting on its laurels but continuing to thrive with ambitious new plans drawing in investment,” said Chris Cotton, who chairs the Exhibition Road Cultural Group, the 10 year old partnership body which successfully campaigned for the street changes in 2006. “South Kensington’s world renowned museums, universities, cultural institutes and venues have never been more popular.”

 Share this article:  Facebook  Twitter
Should Government revise safety advice on Hurghada and other Red Sea resorts? By Andrea Watson
Homes that come with old residents (and bumps in the night) By Andrea Watson
Posting....