Best of the autumn arts review 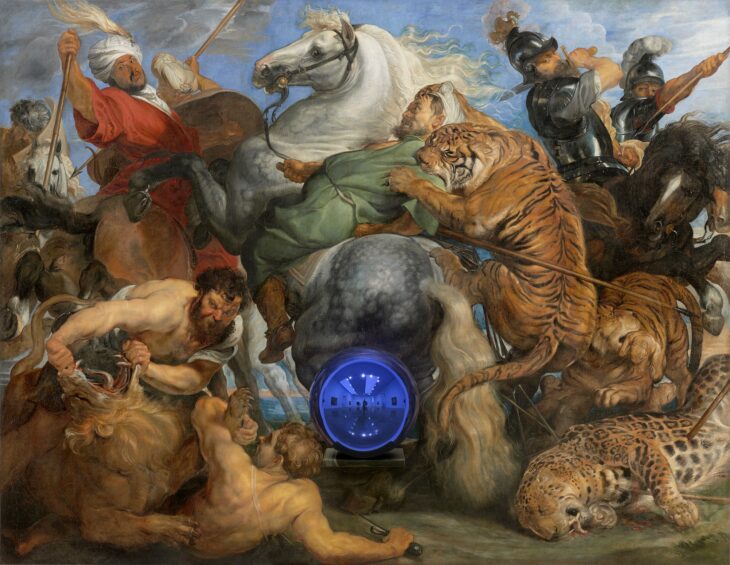 This latest Koons show at the Palazzo Strozzi brings some of his most celebrated works to the Renaissance heart of Western art – Florence – a blessing for the city as it endeavours to recover from the Covid 19 pandemic.

Koons is undeniably a crowd puller. From Wall Street banker (but still a salesman deep down) through a disastrous marriage to the porn star-cum- Italian politician la Cicciolina, his life story is a movie in the making. His early Made In Heaven series – graphically showing him and his wife copulating – earned the derision of the arts establishment. He went on to destroy half the works and after a quiet word with himself came up with Puppy – a giant dog covered with flowers. Who could resist? Not the general public. After this miraculous recovery Koons could ignore the critics and get on with the business of art making which he does in a vast New York workshop filled with acolytes.

In the age of Instagram Koons has thrived. Reflective art, shiny things and mirrors all pander to the selfie narcissists of today. Koons, far from the only artist exploiting this, is certainly one of the most successful. But is there more to it his shiny balloon dogs ($35million a pop) and giant puppies than toys for billionaires? Well yes and no.

Ask Koons about anything and he will launch into Delphic statements that take you from cave paintings to Cezanne via the Renaissance and anything else that fits the moment.

At the moment he is big on gazing balls. These blue convex mirrors were once fashionable garden features. In the hands of Koons they are now attached to copies of classical paintings and statues so the viewer becomes an integral part of the work as he or she stands peering at a tiny self image. “It’s not about the object, and it’s not about the image; it’s about the viewer. That’s where the art happens.”

UNTIL January 2022 at the Palazzo Strozzi, Florence, Italy

As a founding member of the Pre-Raphaelite Brotherhood, Dante Gabriel Rossetti established the look which today we summarise as a “Pre-Raphaelite muse” – swan like neck, sensuous thick lips, magnificent lock of dark red hair and a bold stare quite unlike the demure portraits of ladies that were the norm in Victorian homes.

It is therefore strange, given that the icon is so well established, that there has not been an exhibition devoted to Rossetti’s portraits. Rossetti was not a portrait painter as such but as the first exhibits show the Pre-Raphaelites in learning their trade often drew each other and friends and gave the pictures as presents. After these delicate works, we come to Rossetti’s three principle models and the core of the exhibition. The first Elizabeth Siddal, the famous model for Ophelia (Tate) bears an uncanny likeness to her successor, Fanny Cornforth, his primary muse and model from the mid-1860s, whose portrait stares almost provocatively. Siddal died tragically young aged 32 and Rossetti composed a number of poems which he had interred with the body but later had exhumed, indicating a darker side to his nature.

Rossetti also became obsessed with the wife of Arts & Crafts founder William Morris, Jane, whom he not only painted but had photographed in a series of casual poses that were quite revolutionary in Victorian England.

Says curator Sylvie Broussine: “Portraiture is present throughout Rossetti’s career, from his informal, private drawings of his family and friends to his celebrated oil paintings of the women who inspired him. Rossetti is at his best when capturing the likenesses of those closest to him, ”

Until 9th January at the Holburne Museum, Bath, UK

Tucked away in a corner of East Sussex is Charleston Farm, home from 1916 to Duncan Grant, his boyfriend David Garnett and his mistress Vanessa Bell. These three lived in a curious menage and all three were conchies – conscientious objectors, so the men were obliged to work on nearby farm. In between long hours on the farm, Grant painted his life at the house.

The idea for the present show was to re-create his first solo exhibition of 1920 on its centenary year. Covid played havoc with the plan – indeed pictures were still arriving on the eve of the opening and curator Dr Darren Clarke muttered darkly about paperwork and poppycock. The 31 canvases included landscapes, still-lives and portraits – best know are Venus and Adonis (Tate) a work that is said to have influenced Henry Moore as an art student.

Clive Bell the influential critic wrote of the 1920 show: “At last we have in England a painter whom Europe may have to take seriously,” but the Telegraph called it “a show of the most defiant modernity.”

Certainly, there was much to upset the citizen faced with Interior – a picture that shows Grant’s two lovers engaged in their work, a quiet scene that hides a story of love and jealousies and new models of living and loving.

Dr Clarke, Head “In 1920 Duncan Grant was at the top of his game. After 10 years of experimentation, he had developed his distinctive style that can be seen emerging across the paintings in this show. There is a palpable sense of freedom and energy in these beautiful light filled, life-affirming canvases, a visual freedom after the restrictions of war. These works were made at Charleston and present a secret life that the viewers in 1920 would have had no idea about. We can now appreciate these works not just as excellent paintings but as a document of this brave and experimental world that the artists at Charleston were creating.”

The exhibition is hung in a purpose built gallery which is part of the Charleston complex but be sure to step inside the time capsule that is the farmhouse itself where walls, doors, cupboards and tables were all hand painted by Bell and Grant and the rooms – some designated by their famous occupants – take you on a journey through the Bloomsbury bubble.

A second show of Grant’s works ‘Charleston: The Bloomsbury Muse’ is also on show in London at the Philip Mould gallery in Old Bond Street.

Painting Apart from the World.

The Cernuschi Museum in Paris has secured more that 100 classical Chinese painting from the Ming and Qing dynasties shown in Europe for the first time.

The collection was assembled by the collector Ho Iu-kwong and donated to the Hong Kong museum on his death in 2006.

The works were created over three centuries at a time of great upheaval in China when artists and sages retreated to the forests and mountains – hence the title of the show Painting Apart from the World.

The collapse of the Ming dynasty and the Manchus’ conquest of the empire were deeply traumatic. The capture of Beijing in 1644 and the founding of a new dynasty were followed by forty years of armed resistance. In this climate, many refused to serve the new Qing dynasty and isolated themselves in the mountains. Renouncing their careers as civil servants and hiding their identities, some became monks. This was the case for painters Shitao (1642–1707) and Badashanren (1626–1705), members of the deposed imperial family, who through donning the monastic habit, made the temples their refuge and the mountains their source of inspiration.

Landscapes were already a well established genre having played an important part in the story of Chinese painting since the Song dynasty (960–1279). In the midst of lives often dedicated to bureaucracy and toil gardens – these corners of nature – represented places where the quest for wisdom resided. And in the form of vast landscapes that unfold over long scrolls, dream journeys were described by these masterful artists.

Until January 2022 at the Cernuschi Museum, Paris, France. 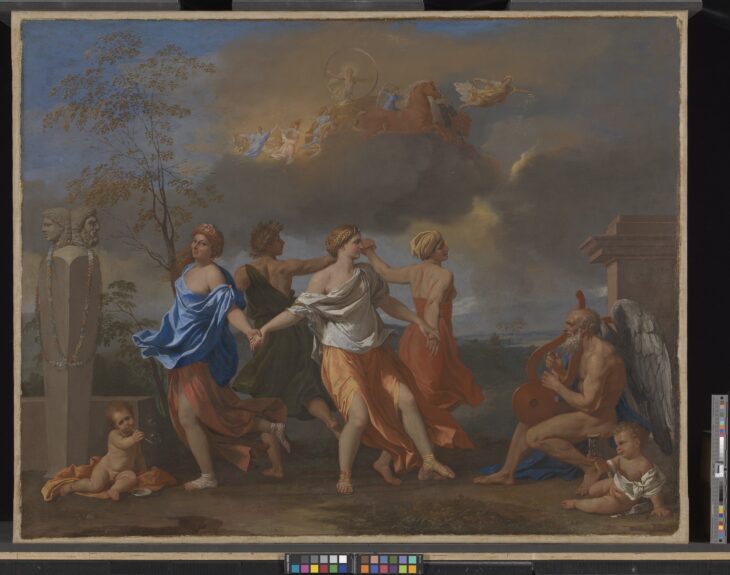 Poussin and the Dance

The latest exhibition at the National Gallery begs you to take a second look at the work of Poussin, a painter whom we tend to associate with rigid classicism. But here wine spills and half-naked figures whirl across the canvasses, all is revelry, dance and drama.

Poussin’s unique paintings of dancers are inspired by classical legends where Gods and mortals wage constant battles with each other. How he captured the riotous movements in the era long before photography is explained by his intense study of antique sculpture.

Poussin’s meticulous working methods are reveal here with reconstruction of his drawings and wax figurines which the artist manipulated into different compositions, underscoring his role not only as painter of dance, but as choreographer.

Until 2nd January 2022 at the National Gallery, London, UK.

Followers of the art market will have noticed the surging interest in something called a Non Fungible Token, or NFT for short. The latest institution to join the gold rush to monetise its holdings is the British Museum which holds the rights to the world famous Hokusai image, The Great Wave. Working with LaCollection, a new NFT art platform, the museum has launched a series of digital postcards to coincide with an exhibition of 103 works by Hokusai, The Great Picture Book of Everything, that were produced in the 1820s – 1840s for an illustrated encyclopedia that was never published. In all 200 Hokusai NFT artworks will be for sale including the Great Wave and Red Fuji. There seems no doubt that NFTs are here to stay and are a rapidly expanding new way to collect limited editions of art that are permanently secured by blockchain technology.

The Great Picture Book of Everything runs until 30th January 2022 at the British Museum, London, UK

A new book by best-selling art-market commentator Georgina Adam (Big Bucks and Dark Side of the Boom) explores the growth of the private museum in the 21st century. Today there are some 400 privately owned museums around the world, the majority devoted to contemporary art. Many are open to the public, posing challenges as they compete with state funded museums. But are they really just tax avoidance schemes? Or perhaps ‘trophy tombs’ where a lot of rot can be buried? Adam explores all these aspects is her new book The Rise and Rise of the Private Museum.